Since we have been in Guatemala four days, we have seen no less than four parades. But the most exciting of the indepencia traditiones has been the carrying of the flame of independence. Mobs of adults (only men) and children--some as young as elementary school--run through the streets blowing whistles and carry flaming torches made from tin cans or cut PVC pipes taped to sticks and filled with flaming rags and gasoline. Traditionally, each village from around the antigua area comes to the city the day before independence day to light a torch from the flame of independence in the central plaza and carries it back to their village. Whether or not this ¨carrying¨occus on foot or more likely in the back of a Ford Pick-up with wooden sides I do not know. But I do know that they run around the city raucously for quite some time before leaving. The kids seemed quite excited. Despite the obvious liability issues involved with the flaming ball of gasoline, I think this would be a great way to boost kids´enthusiasm for excercize in the US. There was not a fatty to be seen. The pictures I took happened to be of mostly boys, but there were plenty of young girls running too. 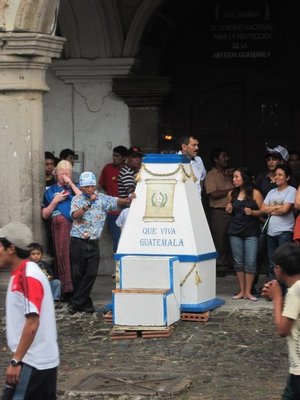 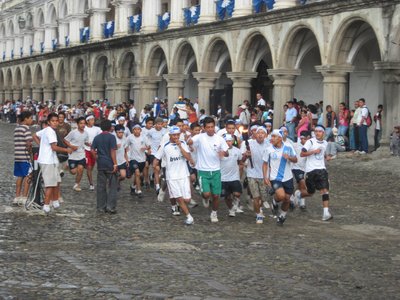 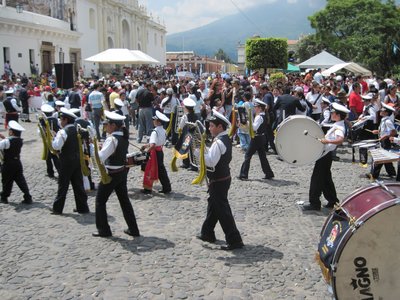 I tried to put up some more pictures of churches or buildings in antigua and the volcanos around antigua and lake atitlan where we are now, but failed miserably. I will try again in the future!

Previous Next Table of contents

Thank you for the photos, although I like reading your experiences, too. I love the comments about no fatties. That's what I want to know about and it's not what you get out of travel guides! Any effects from the tooth-brushing water and green pepper-eating?

"I think this would be a great way to boost kids´enthusiasm for exercise in the US. There was not a fatty to be seen."

That's too bad- chubby Hispanic kids are my favorite! Hopefully you guys get to hang out with some sassy fat kids when you start volunteering. Have fun and post more pics!
-Sean

Comments on this blog entry are now closed to non-Travellerspoint members. You can still leave a comment if you are a member of Travellerspoint.

If you aren't a member of Travellerspoint yet, you can join for free.